This Is Why Health At Every Size® Makes Sense

I’ve been an advocate for the Health At Every Size® approach for some time now. I know the research that very clearly proves that people in larger bodies can be just as healthy as anyone in a smaller body.

The more recent research on weight stigma also makes so much sense. There’s no proof that being “obese” or “overweight” causes diseases like heart disease or diabetes. But people in larger bodies have been made to feel like second-class citizens because they are a “burden on society,” they supposedly aren’t taking care of themselves, and the list of unsubstantiated claims and downright cruel insults go on and on.

It turns out that this stigma, which can come from doctors, other medical professionals, insurance companies, airlines, family members, employers and the average bigot on the street, may be the cause of these diseases – not the size of the person. This stigma has a physical effect on the body, not to mention one’s stress level. It can drive unhealthy behaviors, such as overeating to soothe negative emotions.

Someone engaging in these behaviors may have never had any issues with food or overeating until the stigma began and continued. Yet it’s commonly assumed that people in larger bodies are simply lazy, gluttonous and don’t care about their health.

And these assumptions are making people sick, who never were before – regardless of their size or weight.

I came across an excellent video that explains why the current bias against those in larger bodies, and the assumption that they are unhealthy simply due to their size, is ridiculous. I had heard about this video, called “Poodle Science,” before. But this is the first time I’ve watched it. It does a great job of explaining why trying to force all people to be thin doesn’t work, and it does so with humor, which hopefully holds even a skeptic’s attention for the almost 3 minutes it runs.

Whether you know about or believe in Health at Every Size®, check it out. It’s well worth 3 minutes of your time! 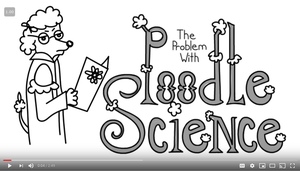