Yes! I want peace with food >>

If you're tired of fighting with your body, I can help.

I want you to know that you're in the right place if:

I spent years trying the newest diets, binge eating in secret, and living in the gym - I even became a personal trainer (with no lasting results)... and I finally found a way past it. In my Intuitive Eating & Mindfulness Coaching Programs, we start by showing you how to stop the cycle of chronic dieting, endless exercise, & beating your body into submission.

Then, I show you how to align the mind & body, to create a positive, trusting partnership that allows your metabolism to heal… so you can discover & maintain your natural weight – with minimum effort.

If you’re curious about my own story & how I made peace with food & my body, read on...

My Triple Life as a

You might be surprised to find out that, even though I firmly believe the “diet + exercise” mentality is old and faulty… I used to be a chronic dieter and personal trainer.

The earlier part of my story may be similar to yours… I started emotional overeating at a young age (think childhood and pre-teen years).

Exercise sounded like a nightmare to me. (I was the kid who did everything she could to get out of P.E. class. I even had a T-shirt that said, “I’m in no shape to exercise.”)

I then added dieting to the mix, which ended up making my overeating worse.

The majority of my teens and 20’s were spent dieting and obsessing over my weight. (Believe me – there aren’t many diets that I HAVEN’T tried.)

I was dieting like my life depended on it.

But I was still bingeing (usually in secret, and often because of the dieting).

Sometimes, I would stop by the store on my way home from work and grab my 4 usual items: a bag of Doritos, something chocolate, something ridiculously sweet like gum drops, and a pastry of some kind.

This happened often, anytime I had a trigger. (And a “trigger” could have been as simple as an uncomfortable conversation at work, or not wanting to sit in traffic for an hour.)

Then I would eat it all in the car, before I got home, because I didn’t want my then-husband to know.

And because I was yo-yo dieting, each diet would end in my eating everything that was off-limits... and I would just gain back even more weight.

At one point, I felt so ashamed of my body, I bought maternity clothes to cover up. (Take it from me, ladies – bigger, baggier clothes just make it worse.)

Then I was forced to take a P.E. class in college.

The best option for me was something that had nothing to do with sports or athletic prowess.

So I opted to take an aerobics dance class.

And I enjoyed it, both as an activity and as a way to lose weight.

I thought I had discovered the “missing piece.” I got more interested in how my body actually functioned. And I realized that, even though I had been dieting for years, I hadn’t been paying attention to nutrition.

That's when I started tracking what I was eating.

And I finally noticed something...

﻿﻿I was eating emotionally.﻿﻿

﻿﻿I thought I was doing everything I was supposed to do to be healthy.﻿﻿

Then I finally found THE diet. The one that would FINALLY work.

It was the first high-protein diet I ever did. Meat and veggies. Very few carbs.

The first 2 and a half weeks were great. I had so much energy! I could totally stick with this diet!

And I felt such shame and frustration.

I was so tired of dieting and hating my body.

I decided it was time to try something new.

So I called up a dietician friend I had met a couple years earlier. She had told me about this thing called “Intuitive Eating,” where she claimed you could eat whatever you want and still lose weight.

(I hadn’t believed her at the time. The idea appealed to me, but it went against everything I had ever learned about losing weight.)

When I called her up and told her that even though I had felt so amazing on this diet, I still couldn’t sustain it, she said…

“Of course you couldn’t sustain it. You got high off your diet.

And what happens when you get high? What’s the only option?

You can’t sustain that high for the rest of your life.

And that's the day I gave up dieting for good.

I committed myself to learning about & applying Intuitive Eating…

I stopped focusing on my weight...

I stopped obsessing over food and calorie counts...

...without me even realizing it...

One day, I was browsing in a store when a saleswoman said, “You need new jeans. Those are falling off of you.”

In that moment, I realized I had been losing weight...

I wasn't focused on losing weight.

After reaching my natural weight and easily maintaining it for some time, I shifted the focus of my business and started working with people around Intuitive Eating.

At least 80% of all my clients have come to me as compulsive eaters. And most of these clients were also “professional dieters,” trying anything and everything that popped up as the latest way to “blast the fat.” (But their only lasting results were significant weight gain that became harder to lose with each new diet.)

Now, I’ve been helping people through my own Intuitive Eating & Mindfulness Coaching Programs since 2002.

I know that this is absolutely what I am supposed to be doing with my life. It’s so exciting to be able to give someone a new perspective, to let them know they don’t HAVE to keep shaming themselves around food and exercising themselves to death.

The best part? Seeing my clients take the concepts and strategies they learn in my programs and make permanent behavior and mindset change. It’s amazing.

Women sick and tired of yo-yo dieting and the disordered or binge eating that follows, are able to create a peaceful relationship with food and a compassionate, positive relationship with their bodies as a direct result of their transformational work with Gillian.

As a certified Intuitive Eating Counselor, whose work is trauma-informed and aligned with the Health at Every Size® approach, Gillian knows these challenges are not about the food.

“Your thoughts & beliefs are key in overcoming struggles with food and your body,” she says. Clients trust her because she faced many of the same issues and overcame them using what became her proven Mind-Body Mutual Trust™ approach she uses with her clients.

For over 20 years, hundreds of women have embraced Gillian’s unconventional yet powerful and proven approach to rejecting diet culture, ever-changing food rules and unrealistic societal expectations for good.

Instead, by making peace with food and cultivating body respect, they learn to use self-compassion in response to difficult emotions and they develop self-acceptance, often for the first time in decades.

Clients learn their body is on their side, and with Mind-Body Mutual Trust™ they work with it, instead of fighting it, for sustainable outcomes that don’t require dieting, restricting or punishing exercise — allowing for more time and energy to enjoy life and pursue their dreams.

Ready to make peace with food and your body?

Get Ready to Make Peace with Food! 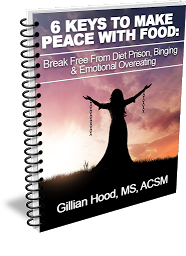