This common question is usually followed by, “What’s wrong with me?”

You’ve probably asked it as well… maybe after falling off the ‘diet wagon’ and subsequently polishing off a half-gallon of ice cream. Do either of these scenarios sound familiar?

“I want to cook a healthy dinner, but I’m so tired after work so I have a bowl of cereal instead.”

“Every morning I plan to exercise after work. But I usually drive past the gym & promise I’ll go tomorrow.”

These statements don’t directly accuse you of being lazy because you aren’t cooking or you didn’t go to the gym. But I bet you can feel the judgment and shame in them. You can almost hear the unasked question at the end of each statement… “What’s wrong with me?”

The guilt, shame, and judgment we put on ourselves when we don’t follow through create internal resistance. This resistance triggers your inner rebel, who screams, “Make me!” All of a sudden you’re back to playing the old self-sabotage game.

The truth is much more complex than something is wrong with you. How can this be true when everyone has gone through similar experiences?

There are several reasons why it’s difficult to follow through on things you want to do. In the next few posts, you’ll learn from a variety of experts about how to stack the deck in your favor so you experience less frustration and more success.

Our Dream of the Future vs. Real Life

Executive Coach Marshall Goldsmith is asked the, “I know what I… “ question all the time. His private clients are already big players, well-known and respected business people, some in positions of great power. Yet he gets the same question!

In his video, “Triggers: Why don’t we do what we know we should do?” Goldman addresses this question.*

Goldsmith says the reasons why have nothing to do with our ethics, values or integrity, nor is it because we aren’t smart. He shares four reasons and makes some very interesting observations.

The first reason we don’t do what we say we want to do is because of a dream many of us have experienced. Goldman describes it this way:

It sounds like this: “You know, I’m incredibly busy right now, given pressures at work and home and new technology that follows me everywhere… Sometimes I feel over committed… every now and again my life feels just a little bit out of control…

I’m working on some very unique and special challenges right now, and I think the worst of this is going to be over in about four or five months. And after that, I want to take two or three weeks and get organized… and… begin my new healthy life program and after that everything is going to be different, and it will not be crazy anymore.”

This is the “Tomorrow will be different!” dream. The specifics of the dream are different among different people, but they have the same framework. In the world of dieting and weight loss, you may have experienced the dream this way:

“As soon as the kids are back to school, I’ll get all the sweets out of the house and then I can focus on intuitive eating and not binging.”

Have you said something similar? You want to stop binging and eat intuitively, but you believe you need to wait until your life is different in some way. Has that ever happened? I say dump the dream and start now, you aren’t starting a diet, you’re starting to learn how to enjoy food again!

Another reason we don’t do those things we say we want to accomplish is what Goldsmith calls, “Planner Bias.”

When we make plans for what we are going to do in the future, we’re usually relaxed, comfortable, not under stress or pressure. But the “doer” as Goldsmith calls the ‘you’ that will be executing the plan is often stressed out, overwhelmed, tired, or overworked.

We all do this – all the time. 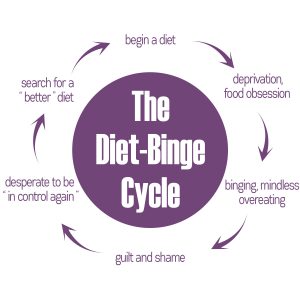 It’s fun to plan the future, especially when you know it will be better than the present. We rarely make plans when we’re tired, stressed out or upset.

Does this sound familiar? Maybe like the diet-binge cycle?

Then you begin and it doesn’t take long to fall into old behaviors – you’re hungry – the weight doesn’t come off fast enough – you feel surrounded by temptation whenever you’re outside your home – and life always gets in the way somehow – you’re back to overeating, binging and hating yourself for having no “willpower.”

This is a classic mistake we make when attempting to lose weight.

So many people simply assume it will be just as easy to take off weight in their current attempt as it was in an earlier diet. It would be helpful if they considered how long they could keep it off, rather than how long it will require to take it off. It can take longer to lose it then it does to gain it back – plus more!

Not to mention the additional pain and suffering that comes with dieting. The hunger, irritability, and light-headedness that comes from a low intake of food are quite uncomfortable. And while you’re experiencing all that, thinking you’re doing something good for yourself in the name of weight loss, you’re actually doing damage to your body, your mind, and your metabolism.

The Odds Are Against You

The final reason why we don’t do what we say we want to do, according to Goldsmith, is that there’s always a good chance that something unexpected will happen that interferes with your plans.

There are so many things that could go wrong at any given time. Goldsmith gives a few examples, including a car accident, someone getting sick or dying, or a company being sold.

Life happens – and when it does, it becomes impossible to maintain whatever diet you may be on.

On the other hand, I’ve had several people tell me they need to wait until the time is “right” to begin making peace with food. I tell them they’ll probably never do it unless they just start now. The time will never be right and unexpected things happen all the time.

It’s better to start making peace with food and learn how to deal with the unexpected while working with me, rather than everything be just right the entire time and a crisis come up after we’re done working together.

Goldsmith tells us to be aware of these possibilities when making plans. By keeping them in mind, if and when you run into one of them, you’ll know it was something other than your own laziness, stupidity or inability to accomplish anything that got in the way. Then you can move forward and keep going after what you want, instead of letting guilt or shame drag you down, keeping you stuck.

For more information on the four reasons why we don’t do what we say we want to do, check out Marshall Goldsmith’s video.

* Goldsmith actually addresses two different questions in the video, but with the same answer. One is, Why don’t we do what we know we want to do? And the other is, Why don’t we do what we know we should do? He doesn’t differentiate between the two. However, in the world of dieting, weight loss, nutrition, etc., there is a distinct difference. The word “should” is a judgment, which often brings along guilt, shame and other negative emotions and beliefs. For our purposes, I’m only interested in why we don’t do what we WANT to do. The judgment tied up in the word “should” isn’t useful or welcome in the making peace with food and body world. However, his advice is still helpful regardless of which question he mentions.