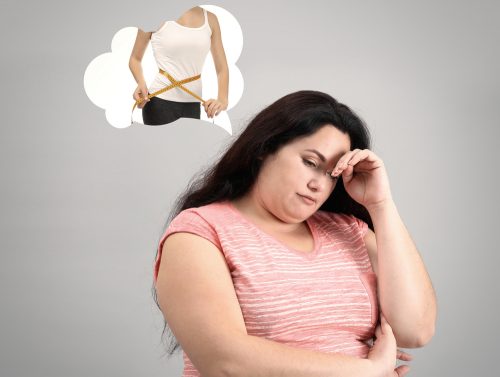 Hate Your Body? Here’s A Reality Check Unlike Anything I’ve Ever Seen…

In this fairly new era of body positivity, there are exciting changes taking place. More women, many in larger bodies, are declaring their freedom from the cultural standard of thin-at-all-costs. They’re embracing their curves. Real food is being eaten in public, in full view of other people. The big secret is out – there is nothing wrong with your body, regardless of size. I’ve been saying you can be healthy and fit in a larger body, so I’m thrilled!

Do you still hate your body? Or have you been able to make some peace with it or even better – accept it no matter what?

Despite this positive trend of embracing bodies of all shapes and sizes, I encounter many women every day who absolutely hate their bodies. (More recently, men are finding themselves stuck in this same body hatred.) They tell me they won’t stop hating them until they lose weight.

What’s sad is most of them know – from their own experience – that losing weight won’t make them happy or make you like your body. Most have lost weight only to discover that life isn’t any better. And worse, they now have to eat even less and exercise more to possibly maintain the loss! (But as contestants on The Biggest Loser have proved, it’s nearly impossible to keep off weight lost by dieting. It’s simply too hard on the body.)

Anyone on the diet roller coaster even a short time has discovered so-called “ideal weight” is simply not sustainable.

1) Remain stuck in the diet-binge cycle, dieting and depriving your body. Wait for the backlash when you start overeating and/or binging. This always leads to guilt and shame, and to the next diet, hoping that “this is the one.” Spoiler alert: It’s not. This leaves you with the other option…

2) Accept your body right now. This is not giving up. This is accepting your body regardless of its size.

I can hear your objections, having had the same thoughts and felt the same way several years ago. My biggest objection was: “I’m a personal trainer, I have to look perfect and be a role model!”

Not only was I wrong, this thinking didn’t stop the dieting or binging (which began at 8 years old). Plus, I could no longer stick with a diet any longer than a couple of weeks. They would end in binges that might go on for days. So much for being a role model!

Body acceptance has been a common and challenging concept for many clients I’ve coached on making peace with food and body. It’s a process and there are several paths to get there. But it is a very personal path that is as individual as the people working towards acceptance.

Recently I came across a TED Talk given by Taryn Blumfitt. You may be familiar with Taryn. She made headlines when she shared before and after photos that look like she got the order of the pictures reversed. Since then, Taryn has become an outspoken and influential member of the body positivity movement. Her documentary, Embrace, was released last year and she has a book of the same title.

I’m a fan of Taryn’s, I love bold women who take a stand for what’s right, especially when fighting against the status quo and damaging cultural beliefs. Taryn begins her TED Talk by throwing insults at people in the audience. She uses words like ugly, wrinkled, and more, and then points out that we talk to ourselves this way all the time.

She shares a story of hating her body so much that she went to a plastic surgeon. This doctor encouraged her hatred, while he pointed out the various body parts he could “fix.”

Halfway through the video, she talks about how we often consider having a less-than-perfect body as a “tragedy.” We believe, “if I can’t have my perfect body then I’ll never have the life I want.” That was a very regular thought of mine. It’s exhausting just thinking about it!

Have you ever felt this way? Do you still?

You may experience a huge reality check when you check out Taryn’s talk. It might be enough to push you closer to acceptance. I wish I had heard something like this when I was working on accepting my body, it may have helped me get there faster. Regardless, I do know it will stir up some new thoughts, and that’s often how big changes begin – thinking about a challenge in a different way.

I would love to know what you think – agree or disagree! Leave a comment below and let’s talk about it!