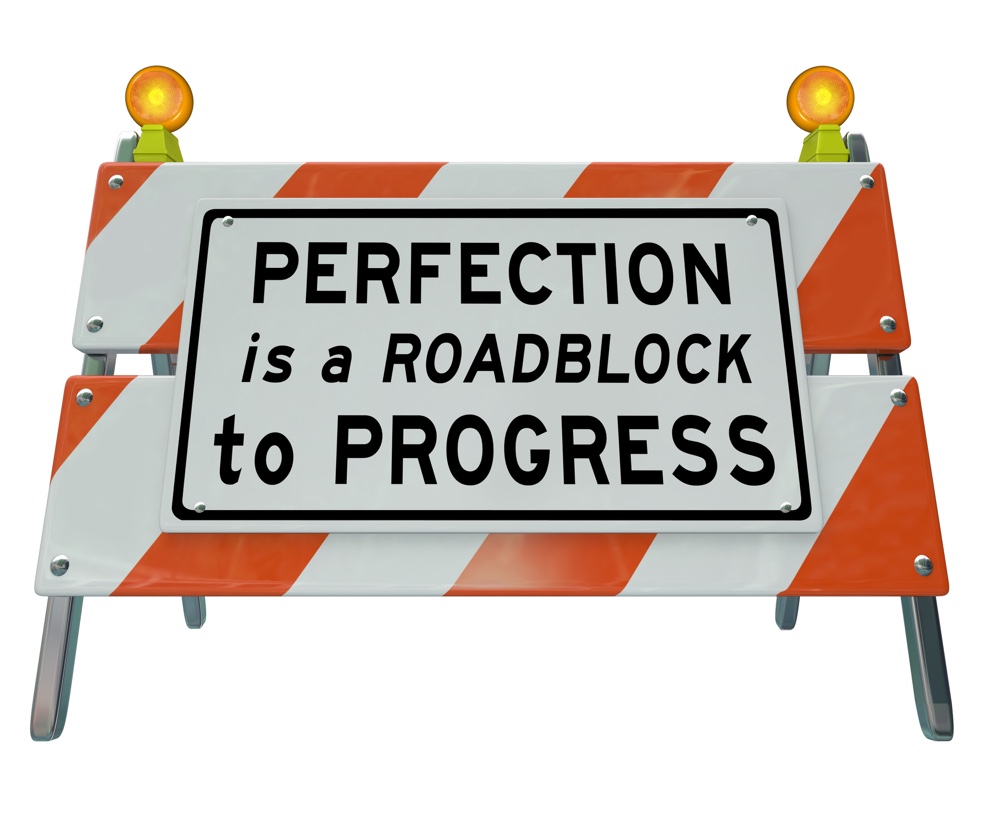 I’ve been thinking about perfectionism a lot lately. It’s a trait that I’ve let run much of my life. Mainly because I wasn’t aware of what it was doing. Becoming aware of our thoughts, behavior, patterns, and more is an important first step in making peace with food and overcoming emotional overeating. It’s also the first step in overcoming many other obstacles in life, including being a perfectionist.

The reason I’ve been thinking about perfectionism is despite the work I’ve done to release my inner perfectionist, there’s another layer that has recently shown up. I need to uncover what it’s about in order to achieve a couple of goals that currently seem unattainable. But now it’s clear that wanting to achieve these goals “perfectly” is the block, I just need to figure out how to release it – and soon, hopefully!

Back when I was working through my issues with dieting and overeating, and learning intuitive eating, I discovered how much perfectionism kept me from finding peace with food and my body. Wanting to be perfect kept me dieting. Not being perfect led to frustration and overeating. Guilt and shame from overeating and not yet achieving perfection led back to another diet.

Perfectionism got in the way unexpectedly when I was working on awareness with my eating. I had those moments where I just wanted to numb-out with one or two of my favorite binge foods. My goal was to stay aware and make a decision when I would feel one of these urges to overeat. I was tired of sleeping off binge eating sessions, wasting hours at a time.

There were three choices. I could choose to eat (this must be an option, otherwise you’ll stay stuck in the diet-binge cycle). I could choose to identify the emotion (if I knew it was an emotion causing the urge). The third choice was to find something to divert my focus from the overwhelming urge to eat. I wanted to practice this diversion, or distraction, option because it was often easier to do and took less time than dealing with my emotions in that moment (and I could come back to my feelings when I had more time).

The concept of distraction was new to me. In my mind, I had two choices – the first to overeat. Taking the time to identify and process my emotions (a.k.a. feeling your feelings) was the other option I knew about. This one was scary since it was easy enough to overeat, but it felt difficult and time consuming to deal with emotions. However, if I chose to feel my feelings, according to Diet Mentality, I was GOOD and I was making a GOOD choice. The distraction option actually felt like I was “cheating”, because I was doing something other than being GOOD.

Looking back, it’s very clear this was simply another version of my old standby, perfectionism. It said I needed to make the perfect choice, which was the GOOD choice – to feel my feeling. The truth, however, was simply that I had three equally valid options: to eat, to distract or to feel my feelings. In reality, none of these choices made me a better or worse person. It makes sense now, but at the time I couldn’t understand why I kept overeating and never choosing to feel my emotions. Clearly I was stuck in perfectionism and deeply attached to the Diet Mentality. The guilt and shame and relentless noise in my head would never allow the easier, and valid option of distraction.

Perfectionism is actually a part of the Diet Mentality. In Intuitive Eating, we learn that the Diet Mentality is made up of three main components: failure, willpower, and all-or-nothing thinking (a.k.a. black and white thinking). The need to be perfect fits into all-or-nothing thinking. A food is either good or bad. You are either on a diet or binging. Something is either right or wrong. There is no room for the middle of the road, or any grey areas. You are either perfect, or a complete screw-up.

This thinking is so common, you can find it everywhere, not just diets or “eating plans”. And everywhere it exists, it causes problems. In my case, it would not allow me to try distraction, which is a very effective and valid option to help an urge to overeat pass. I eventually learned I could choose distraction, and if the urge came back later on, I could then decide to look at what emotions may be coming up.

Allowing myself to choose distraction (and reject perfectionism) also made the times I chose to overeat not as intense as they were in the past. Because all three options were now equal, I didn’t have that “little voice” telling me to eat as much as possible since this would be the last time I ever ate _________ (fill in the blank).

The next time you have that urge to overeat hit you, consider distraction. Call a friend, turn on some awesome music, go play with the dog, find something enjoyable to do for whatever length of time you need (it’s often not nearly as long as you think). Keep an eye out for perfectionism if you’re feeling stuck – you’ll be surprised how much easier life can be once you’ve moved past it. Just keep an eye out for it – it does have a funny way of showing up when you don’t expect it!

Need help moving past perfectionism? Want to figure out if it is causing your inability to overcome overeating, and even losing weight? Let’s talk about it and get rid of perfection so you can move forward! I invite you to schedule a time to talk about this…just go to www.TalkWithGillian.com to fill out a quick form and pick a date and time on my calendar.

When we get on the phone, we’ll talk about what’s going on and look for the reasons why the perfectionism is hanging on. I really look forward to speaking with you – I’d love to help you find the freedom that I and countless others have found by giving up the need to be perfect and being able to make peace with food and your body!